I’ve been so pumped for GeekGirlCon 2014 for months now, and I’m still in a bit of a haze now that it’s behind me. If you haven’t seen them yet, go here and here to see my pre-con posts. This was the first con I attended as “press”, so this was kind of a giant learning experience, but ultimately it was amazing.

I experienced so much amazing stuff at the con, so I’ve been having some hardcore writer’s block when it comes to recapping.

So instead of doing one master post, I’m gonna break my con coverage into a couple of posts. In this post I’ll talk about a few of the highlights of the con. So here goes:

I was fully unaware that Anita was planning to attend the con, let alone that she was going to have her own panel.  So while I had originally planned to attend a different panel during that time, as soon as I saw her name on the schedule I high-tailed it over there.

Hearing Anita speak was equal parts inspiring and discouraging. While she’s trying to do some really cool stuff, starting a conversation on feminism in pop culture (she’s focused a lot on video games recently), she’s gotten a TON of pushback, hatred, and threats of violence. In fact, she even received a threat at GGC, and recently received another threat regarding her scheduled talk at USU.  Polygon talks about it here. So while it was inspiring to hear her goals and dreams for her non-profit, Feminist Frequency, and it was so cool to hear how strong she is being in the face of some truly scary stuff, it was so discouraging to see how many people react to her with such hatred and violence. Regardless, I’m stoked that I got to hear her speak.

I love YA, I’ll admit it. So I was so excited to see the Fierce Reads panel featuring 5 amazing YA authors, Marissa Meyer, Nikki Kelly, Lish McBride, Jessica Brody, and Gennifer Albin. I’ll be honest, prior to this panel I had only heard of Marissa Meyer, but these women were so hilarious and engaging that I’ve put each and every one of their books on hold at the library (yes, libraries are still a thing). While I’m not looking to become a YA author, I am fairly certain I’ll always be a consumer of YA literature. It was so much fun to hear about their process, and, if nothing else, listen to Nikki Kelly and her lovely English accent.

And, of course, I got autographs. 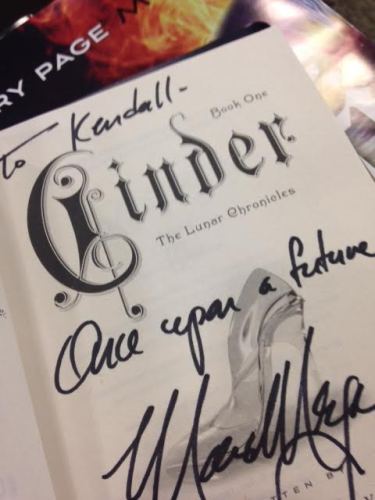 3. Nerd For a Living

A group called Nerd For a Living also held several panels about starting and growing a geeky business. As someone who runs her own geek blog, I was quite interested in these panels. I was expecting to find these panels stocked with various bloggers, but N4AL was able to grab women from a wide variety of “geeky” professions, from makeup artists to cartoonists, and even yarn-makers. The panels offered a really wide range of professions, so the perspectives and experiences were quite varied. It was great. Here are two of my favorite quotes from their How to be a Nerd for a Living panel:

“We work so hard at this because not one of us wants to have a grownup job.” #n4al @TheGlitterJedi #GGC14 #KenAtTheCon

4. Community with a Capital C

You guys, there were so many amazing people at this convention. One of my favorite parts was getting to meet up with other bloggers at the fabulously named Raygun Lounge. I spent the most time chatting with Jamie Broadnax from Black Girl Nerds and Sarah Beck from Women in Game Studies. The folks that are a part of the GeekGirlCon community are brilliant, hilarious, and so kind. As a painfully shy introvert, I wasn’t sure what kind of connections I would make, but everyone was so welcoming and friendly that the shy introverted part of me didn’t even have a chance to take over. If you’re interested, you can read Sarah’s recap of the Feminist Community Building panel she moderated here.

There were So. Many. Daleks. This particular Dalek was made by a con volunteer, and it was remote-controlled.  It would rove around the con, and it even had built in music to make it extra-menacing as it scooted along. The scope also moved, which was amazing. I was also a huge fan of how many parents dressed their kids as Daleks. If I’m ever a mom, you can bet your bottom dollar my kid will be spending a great deal of Halloweens dressed as a Dalek. As for the rest of the con’s cosplay, my camera failed me, so I didn’t get the stellar cosplay shots I had planned on getting. So, if you want to check out some of the truly awesome cosplay featured at GGC (because there was a lot), go here and here.

GeekGirlCon ’14 was a truly amazing con, and these five points barely scratch the surface of how awesome GGC is. If you’re interested in learning more about GeekGirlCon, head to their website. Everyone who works for the con is a volunteer, and they rely largely on donations. If you’re interested in donating to the con (they even have prizes if you donate certain amounts), you can do that here.

I’ll be posting again tomorrow with more info on the con, my everday cosplay endeavors, and what I’ve learned after my first foray into being a member of the press at a convention. Stay tuned!