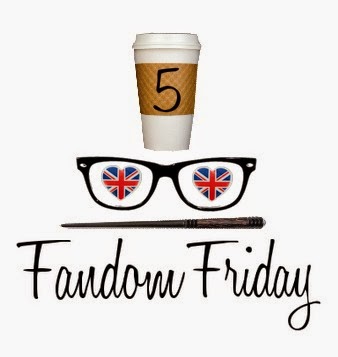 I am very open with the fact that I am a huge, seasoned Netflix-binger. When my job gets stressful, when life gets crazy, or when I’m feeling depressed, there is nothing better for this introvert than turning off my brain and getting lots in a fictional world for hours. So I was incredibly excited about this week’s Fandom 5 topic, my 5 most binge-worthy shows. While there are tons of shows that you could totally lose a weekend with, here are my five faves:

I love this show. It’s hilarious and filled with that dry, British wit that I love. It’s impossible to stay in a bad mood while watching this show. In addition to being fully hilarious, each episode is only thirty minutes long, so it’s quite easy to binge on IT Crowd. This show also doesn’t really have a central storyline running throughout like Lost or The Walking Dead, so you can also jump around and watch the show in the order of your favorite episodes rather than chronological.

I’ve already said how this show is great to watch on a sick day, but it’s also great for a nice binge. Another thirty-minute comedy, it’s so easy to just lost giant chunks of your life hanging out with the Pawnee Parks Department. The entire series is on Netflix, so if you’ve got the mettle, you can not move until you’ve seen every Parks episode ever invented (I do not advise that–take some breaks, crazy)

Unlike IT Crowd and Parks and Rec, Bob’s Burgers is still on the air, so every episode isn’t on Netflix (it might be on Hulu, though). Still, with five seasons in the bag, there are plenty of episodes out there for a hearty binge. Bob’s Burgers is an “adult cartoon”, but it isn’t as crass as cartoons like South Park and Family Guy--the characters are also a crapton more likeable. That paired with the occasional song and dance number (not Broadyway style like Family Guy) makes this show great for a light-hearted binge.

This is another show that’s currently on the air, but the season on the air now is season 10, so you have nine seasons that you can burn through on Netflix before you even have to start thinking about the current season. Supernatural is a crazy show (and it’s campy at times, I’m not afraid to admit it), but it’s got a lot of heart. You can’t help falling in love with Sam and Dean, and their relationship (which is just as close–though not as destructive–IRL) really carries the show. Whether they are fighting a ghost or trying to seal the gates of hell, Sam and Dean’s relationship keeps the show grounded and heartfelt. And the show can also skew incredibly goofy, so it keeps you on your toes.

Okay, this is the most binge-worthy show out there. I burned through all five seasons in just over a month. When I introduced this show to my parents we watched the entire first season with them in a weekend. Breaking Bad was, in my opinion, one of the best if not the best show on television. The writing is brilliant, the characters are dynamic, and the acting is stellar. This show is more addictive than a hit of Heisenberg blue though, and it leaves you with one hell of a Netflix hangover. So watch responsibly, kids–but totally watch, because OMIGOSH it’s such a freaking good show.

What are your most binge-worthy shows? Let me know in the comments! And be sure to check out my other Fandom 5 posts, and follow the #Fandom5 hashtag to see what everyone else is talking about today!

22 thoughts on “5 Fandom Friday: My 5 Most Binge-Worthy Shows”