Guys. I have a real problem. I’m not sure what it’s called, but it’s somewhere between delusions of grandeur and over committing. Either way, I think I have the time and ability to do all sorts of magical things that I simply do not. Case in point? The Winter Soldier hoodie.

I was certain, absolutely certain that I’d be able to easily re-create a low-key winter soldier hoodie for myself. Did I flake out on the project? No. I made myself a damn hoodie, but it was at quite the personal cost. Here’s what I learned, and I’d like to impart that knowledge on to you.

Don’t Have a Sewing Machine? Rethink Your Lofty Plans…

The initial tutorial I linked to was fairly straight-forward with very little sewing. Take a gray hoodie arm, sew it onto a black hoodie, and draw on the black marks to make your arm look like Bucky’s. But this girl was like, “That’s too easy! I want it too look ~authentic~”. I decided I would leave the black hoodie arm on and sew on gray strips. It felt more authentic to me, but it really was just a pain in the ass that ended up leading to me drowning about 16 hours into a project that I ultimately scrapped and started from scratch.  If you’re a sub-par seamstress with no equipment, keep it simple, kids. Definitely measure and pin stuff, but keep the end goal easy to achieve.

Know Your Limits, and Bail When You Need To

Like I said, I definitely didn’t give up. I made myself a Winter Soldier hoodie, but after I realize what a dumpster fire my first attempt at a hoodie was, I just left it alone for a while.

Whether or not you need to bail on the project completely is up to you, but don’t be afraid to admit you’ve bitten off more than you can chew, and either scrap the project or just re-imagine it.

Get Advice and Support From Other People

If this is your first time sewing anything more complicated than, hypothetically, ribbons on your pointe shoes, seek out the advice of others who have done this before. Sometimes they’ll freely offer advice, sometimes you’ll have to ask for it, but either way glean as much experiential knowledge as you can. Learning from other people’s mistakes is way easier than learning from your own, right?

I’ll be honest. This project was a lot of work, and the end result…it isn’t perfect, y’all. The red star isn’t centered enough, the stitching isn’t gorgeous, and I sort of lost steam when it came time to adding the lines. It’s just a straight up, two-toned gray arm. But I’m kind of unreasonably proud of it. Yeah, I know it’s not great, and the entire thing was a LOT harder than I expected for a result WAY below what I was hoping. But I did it! I completed a project, as crappy of a final result as it might be. Now I know what I can do better going forward, and I’ll always be able to look back on this first project fondly. Here’s how it turned out (and please enjoy my picture with Bucky-inspired eye makeup). 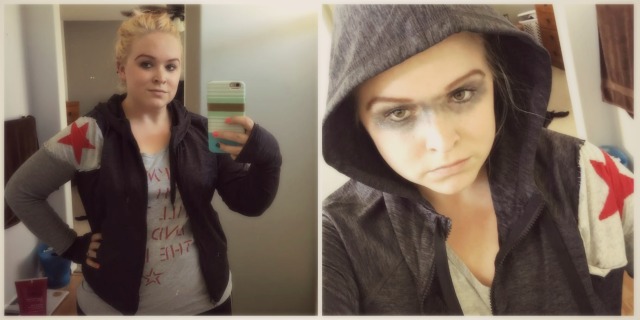 So like I said, it isn’t perfect, but I sewed the entire thing by hand, and I’m pretty excited to say that I actually finished a project I wanted to attempt. My next project will be far better, and by then I’ll hopefully have a sewing matching that will keep me from wanting to kill something.

Tell me some of your less-than-perfect cosplay/sewing stories, and feel free to give me any tips and tricks in the comments!

4 thoughts on “Well, That’ll Do: My Winter Soldier Hoodie”