Friday was a day that, apart from my own panel, not much else happened for me. I got to explore the exhibition floor–which was SPRAWLING this year. This is just the Pop Culture Classroom area: 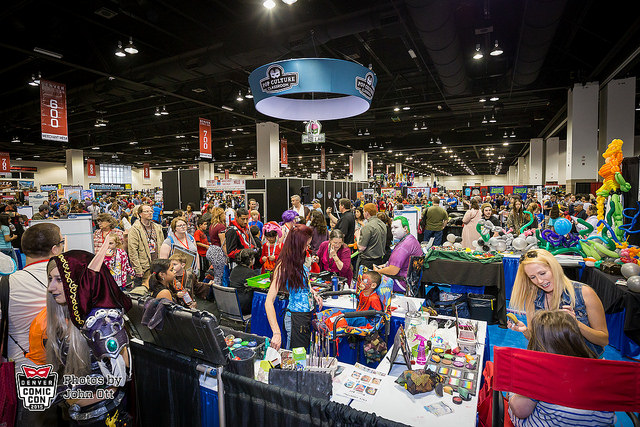 But on Saturday, I attended panels galore. In previous years, the big “main stage” panels were held in one of two (maybe three) ballrooms. You had to line up outside for FOREVER in a different ballroom that was essentially modeled after Crowley-run hell. This year, they had one giant theater for the big main stage events that didn’t clear after each panel. So, in theory, you could stay there from the first panel to the last. So on Saturday, I really just parked myself in the main stage room and enjoyed some of the amazing panels–they really got a pretty amazing lineup this year.

I was so. excited. for the Hayley Atwell panel. Though I’m painfully behind on Agent Carter, I love her and the entire Captain America story in the MCU. You guys, if you are ever in the position to see a panel with Hayley on it, GO SEE HER. She is full of energy, and you can tell she has loved every second she’s gotten to play Peggy. Of course she touched on some of the more painful things happening in the Peggy-verse these days. She addressed the show’s cancellation, letting fans know that she hadn’t given up hope just yet. When she was asked if Peggy could fit in well with the darker tone of the Marvel Netflix shows, she smiled and said, “Peggy could handle it.” So it’s unclear what Peggy’s future holds, but Hayley seems up for whatever opportunities Marvel gives her. Of course, she also spoke about the infamous Hydra Cap situation. Of course, Hayley wasn’t entirely convinced he had gone full dark side.

“He’s clearly going through an existential crisis, and he’s clearly missing Peg. But I suspect he’s bluffing.”
—#HayleyAtwell on #HydraCap

So hopefully Cap’s story is one that will be redeemed. If Peg has faith, so do I. But that wasn’t the only Cap scandal she covered. She also mentioned that kiss Cap shared with one Sharon Carter–Peggy’s niece. Of course she made headlines when she said the relationship was a bit messed up, and while she still stands by the fact Cap dating Sharon is wrong, she reminded fans that it’s all in good fun. After all, it’s comic books and superheroes. They should be fun, right? The panel also touched briefly on her episode of Black Mirror, which she called just a long crying session for her (which is fair, because that’s what it’s like to watch Black Mirror), as well as an answer to her interest in playing the Doctor. Her one stipulation? Her companion has to be Billie Piper.

I think the Doctor Who fandom would be more than happy to see a run of Hayley Atwell’s Doctor travelling around with Rose Tyler, amirite? These two are such a huge IRL BroTP for me anyway, so I’d love to see them having adventures across time and space in the TARDIS.

So if you need me, I’ll be campaigning for an Atwell/Piper season of Doctor Who.

You guys, I had no idea Cary Elwes was so great. I mean, I love most of the stuff he’s been in, but this guy is HILARIOUS. He does some of the best voices, and spent his panel impersonating everyone from Andre the Giant to Rob Reiner to Cockney British actors. He also spent a huge chunk of his panel telling us stories from the set of Princess Bride, like the fact that he severely broke his foot just two weeks into shooting after going on a wild ride on Andre the Giant’s ATV. It’s so bad that Elwes says you can see him occasionally limping or hopping about in some of the scenes on Princess Bride. Even better, they had to postpone all of his sword fights until the very end of filming just so he could be standing on a solid two feet. And though he started out his panel really trying hard to not say “as you wish”, calling them “those three words that I say”, he obliged when a fan finally asked him directly to say it. That movie was such a huge part of my childhood, so it did my heart good to not only say his most iconic line from the film, but also to hear how much fun the cast had together.

The last panel of the night was John Barrowman–who I got to interview with his sister over at Nerdist, btw–and his panel was NUTS. John basically feeds off of the energy of a crowd, so his panel was tons of fun because he was just amped the entire time. He came out in genderbent Cas cosplay (he loves Supernatural, and would love to be on the show), and then changed mid-panel. But his panel was full of fun hijinks like that. He brought a fan up to dance with him and his husband, and at one point he crawled over all of us (I was thisclose to touching his ankle when he went past me, but I deemed that creepy) to answer a fan question up close and personal. 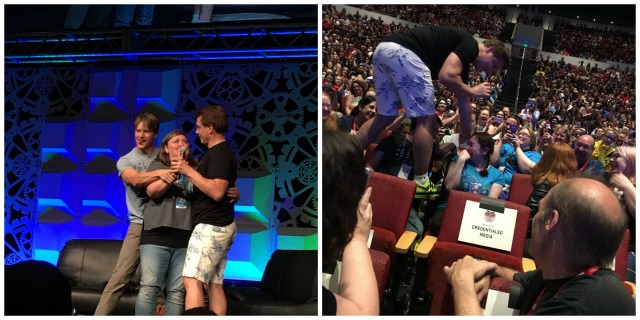 You guys, I was so impressed about how amazing these panels were, and the sheer size of the event was astounding. Denver Comic Con has grown so much over the past few years, and I’m so happy to get to be a part of the convention. If you want to see another perspective, check out my buddy Amelia’s recaps of day one and two over on Geekly Planet!

Did you go to Denver Comic Con? What was your favorite part of the Saturday panels? Tell me your thoughts about the panels or any other Atwell, Elwes, or Barrowman panels you’ve seen in the past in the comments!