Over the weekend of Denver Comic Con 2016, I loved, loved, loved, spending Friday on the exhibition floor and freaking out over my panel, and I loved spending Saturday with the likes of John Barrowman, Cary Elwes, and Hayley Atwell. However, the Sunday panels were hands down my favorites. In DCCs past, Sunday was always more of a slow day to help you wind down from the con craziness. Not this year though. Sunday had people from Supernatural, The Walking Dead, Marvel, Doctor Who, and my favorite internet ladies, The Hillywood Show. It was a great day, but by the end of the day I was EXHAUSTED! Here’s how the day shook out:

I was soooo thrilled to hear that Jeffrey Dean Morgan was coming to Comic Con this year. His appearance was a bit of a late announcement, so it made me even more excited to see him at the con. I didn’t have time to save up to get a photo op with him, unfortunately, but getting to see his panel was treat enough. So what did he have to say about Negan’s role on The Walking Dead? Nothing. He said that he gets to laugh a lot as Negan, which in turn upsets Andrew Lincoln, which makes him laugh more, and he said that waiting for an answer to “who met Lucille” isn’t the worst thing in the world. But apart from telling us how much fun it is to play such a twisted bad guy, we didn’t really learn too much–which is unsurprising. What I really loved was hearing him talk about Supernatural, and his feelings towards Jared Padalecki and Jensen Ackles. He talked about how seeing them “all grown up” made him feel incredibly proud, and he liked to think he had a small part in that–even though he’s only ten years older than Jensen Ackles. He also mentioned that he’d love to come back to the show, especially if it was for the series finale, and if Jensen directed. I’m all for that. He was also asked a question by a girl in genderbent Comedian cosplay, which he thought was so rad that he brought her onstage.

JDM hasn’t been doing the convention circuit for long, but he seemed to be pretty comfortable onstage (his wife–who he met through Jensen Ackles, btw–and adorable son were in the front row, which I’m sure helped him out) and he put on a super fun panel. He was funny, sweet, sincere, and you could tell how much of a genuinely fun time he has working on and talking about the shows he’s a part of. Papa Winchester didn’t disappoint, you guys.

Of course that was only a fraction of the day. Next, we took things over to the Marvel ‘verse…

What makes a Clark Gregg panel so fun is how much of a fanboy he is IRL. If you didn’t know, this guy is essentially Coulson himself. He loves comics and the heroes from Marvel just as much (though I don’t think he has vintage cards like Coulson–although Coulson doesn’t even have his cards anymore), and when asked if he was Team Cap or Team Iron Man, he full Coulsoned everyone, calling the question-asker “young lady” and asking how the Sokovia Accords would affect the Inhumans in his charge. It was THE BEST. He also spoke about life after Coulson died in Avengers. He happened to see the #CoulsonLives Twitter campaign while running his wife’s (Jennifer Grey) Twitter while she was on Dancing with the Stars. After that crazy campaign and seeing the Marvel fans flock to bringing Coulson back, we got a living, breathing Coulson and the amazing show Agents of S.H.I.E.L.D. So can we expect to see him back on the MCU? Or what about his feelings of bringing in some of the other Marvel TV characters into the MCU? Coulson–I mean Clark is game, but he’s okay with waiting. Obviously, he’s got to figure out a gentle way to let the Avengers know he’s still alive. You know, in a way that won’t make any of them so mad they kill him…but more than that he’d love to see the Marvel shows (he named Matt Murdock specifically) mix with the MCU, but in the right way. He thought having some brief, blink-and-you’ll-miss-it cameo wouldn’t be the best, but if they could blend the worlds in a natural and awesome way, he’d love to see that. So we can hope our future will hold some rad crossovers.

I wasn’t able to stick around for this entire panel, but I did enjoy getting to see these two together. The biggest thing I felt from this panel is that when Jenna originally took the job as Clara on Doctor Who, she had no. idea. how much this would change her life. To this day, I feel like she’s still trying to understand Whovians, convention culture, and why the heck a bunch of randos are paying upwards of a hundred bucks to take a picture with her. Still, it’s obvious she loved the show, the characters, and her fellow actors, which I always love seeing. Alex Kingston, on the other hand, is ALL ABOUT this kinda thing. She totally seemed to feed off the crowd, and was a lot more vocal than Jenna (introvert vs. extrovert, basically). When Jenna asked if she would be coming back to Who–especially after Peter Capaldi made some cryptic remarks about her–she shrugged it off as Peter being Peter and trying to create buzz. She also said that she’d only just left, and Pearl Mackie was starting her run as companion that very day. So even though she seemed to make the answer seem like a solid “no, I’m done”, she never officially said her days in the TARDIS were over. She just didn’t want to take the spotlight from Pearl. Alex Kingston also made some controversial remarks saying that she wasn’t on board with turning the Doctor into a woman in a future regeneration. We’ve seen with two other Gallifreyans that a gender change in a regeneration is possible–The Master/Missy being the most notable–Alex thought that since he’s always been a guy, he should stay that way. I love you, Alex, but we’re gonna have to agree to disagree there. 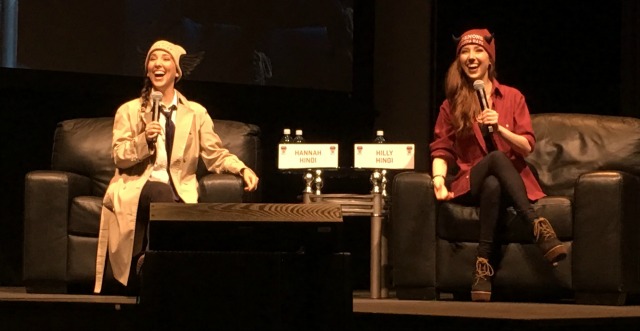 I actually got to interview Hannah and Hilly (an interview that will be coming out on Geek & Sundry, so stay tuned for that), but I also couldn’t wait to attend their panel. While I’m pretty sure they were in Hilly!Dean and Hannah!Cas cosplay the day before, their Sunday panel was in Dean and Cas casual cosplay (sporting their Hillywood Supernatural parody beanies, obvs). These girls are so sweet and just a ton of fun. They were encouraging to members of the audience who wanted to start their own show on YouTube, and they were so grateful that they had the opportunity to create the show thanks to their Patreon supporters (you can support the show here if you are so inclined). They also watched some of their parodies with the audience, namely their Lord of the Rings Parody, the Walking Dead Parody, the Doctor Who Parody, and their Supernatural Parody. 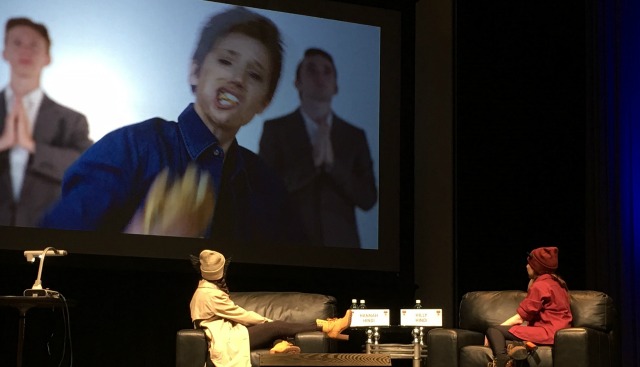 When I first saw the Supernatural parody, I was by myself and had to fangirl with friends online. So it was really fun to get to watch it in a room FULL of other fans and Hannah and Hilly themselves. Their biggest encouragement to the audience was create something original and don’t try to copy what someone else is doing. You’ll only gain a following and stand out from other YouTubers if you are providing something that only you can give an audience–that’s what people want to see, not a knock-off. These girls are amazing. I was so impressed that they not only did zillions of panels and took the time to not only do photo ops, but they also manned a booth and spent individual time–and the occasional selfie–with each fan who came through to buy some merch.

Of course the unsung hero of the convention is also the lovely Clare Kramer, who was the moderator/interviewer for most of the mainstage panels. She was busy the ENTIRE weekend, and helped make every single panel awesome. I have no idea how she was able to stay energized for it all, but she did a great job. If you haven’t checked out her or GeekNation, you totally should do that. She’s fantastic, and helped make all of the panels amazing. She’s hosted mainstage panels for a while at Denver Comic Con, and I’m always impressed at how she handles the panels–even as they’ve grown significantly over the years. Seriously, Denver Comic Con had record attendance this year, and I know that a huge part of that is because they put on some truly impressive panels. I’m already getting excited for the adventures in store next year!

Have you seen any of these folks at a convention? What question would you like to ask them if you could? Tell me about it in the comments!