If you follow me on Instagram, you know by now that I just returned from an AMAZING one-week adventure in Los Angeles, California. It was my very first time in the state (okay, once in high school I had to catch a connecting flight in LAX, but I never left the airport so it doesn’t really count). I was certain I’d love California, but I wasn’t sure if I’d love LA. I knew my blog buddy Megan at The Nerdy Girlie loved it (which by the way, if you haven’t heard about her 100 Cups of Coffee book project, you should check it out), but I wasn’t sure if it’d be my style.

Let me just tell you that LA is definitely my kind of city. It’s beautiful, and it’s got such a unique vibe between that California cool and breezy beach vibes with the excitement and bustle of a big city. Yeah, traffic can be rough, but it is worth it to get to spend time in such a cool place.

While there were so many amazing things to see (which I’ll talk about in later posts), one of my favorite experiences from the trip was visiting Universal Studios Hollywood. Of course, visiting a popular theme park can be a bit of a daunting task. Navigating crowds, deciding which lines are worth the wait, and maximizing your fun can feel like a big job when all you’re wanting to do is spend some time hanging out with some of your faves from Universal flicks. So to help you maximize your time at Universal, here are five things you should know before you head to the park:

Everyone will tell you Universal Orlando is better. Don’t listen to them.

For some weird reason, when you tell people you’re planning to hit up Universal in Hollywood, their knee-jerk reaction will be to tell you that they’ve either heard or they think Universal Orlando is better. Now to be honest, I’ve never been to the park in Orlando, but I can tell you that Universal Hollywood is a blast. I’m sure the park in Orlando is larger with more attractions, but you’re going to have loads of fun at the Hollywood park. So when people say that to you, just shrug and tell them you’ll have fun regardless. Because you will.

I’m always dubious when places tell me to get their companion app. Space on my phone can be precious, so I don’t want to waste it with useless apps. In this case, you definitely want the app. It certainly won’t make or break your time at the park, but with a live update of line lengths and an interactive map, it makes finding your way a lot easier. We were able to maximize our time at the park and seriously minimize our time in line thanks to that app.

I’m sure by now that you’ve heard of the fun wand-choosing experience at Ollivander’s. It’s a super brief encounter, and only one person is chosen to experience a wand choosing them (and it’s usually a kid, so don’t get your hopes up adult Potterheads). Still, it’s utterly magical and it’s a really well-made experience. The thing is, it’s a shorter encounter, but the lines can be LONG waiting to get in. So when you first arrive in the morning, head straight to Ollivander’s and experience that first. You’ll still have to wait in line (it’s inevitable, folks), but the line will most certainly be longer as you get into the afternoon.

If you can, go when school is in session.

Guys, the longest I waited for a ride was about thirty minutes. Truly. My guy and I went on a Tuesday when school was in session, and while there were definitely kids there (there are always heaps of people), we seriously lucked out in every single ride. We got to go on just about everything twice (and Harry Potter’s Forbidden Journey three times, because HARRY POTTER, y’all), and we stayed til the park closed. I can’t promise you similar results if you go on a school day–the park is always packed, regardless of school and work days–but it’s a bit less chaotic when most people are at work or school.

Buy your tickets ahead of time online. 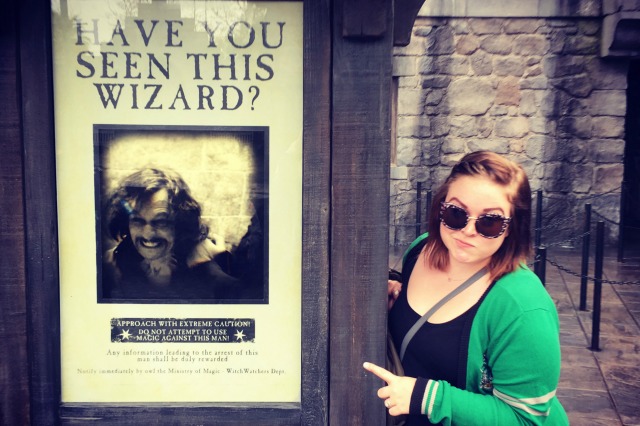 Seriously. It’s cheaper, you don’t have to wait in line, and it allows you admission into the park one hour early to check out the Harry Potter world. Listen, I’m not a morning person at all, but getting to access the Harry Potter stuff an hour early made everything extra special. While there are still a good number of people there early, the crowds were a bit smaller so I was able to take my time, really enjoy Hogsmeade, and take some fun pics of the attractions without worrying that I was getting in the way of everyone.

Definitely do the studio tour.

As a huge movie buff, I was stoked to see stuff like the Universal backlot. However, if getting to see the house from Psycho doesn’t fill you with childlike glee, you might be tempted to skip the studio tour. Don’t. It’s so much more than just a standard backlot drive-through. I won’t give away any spoilers, but it is one part tour one part immersive experience. I had a blast, and I know you will, too. Plus, it’s just rad to see the Psycho house. I don’t care who you are.

Even if you aren’t interested in getting a picture of you next to a very realistic-looking Transformer, you should definitely hang around to watch them pose for pictures. While Bumblebee’s words are understandably limited to whatever he can pull from pre-recorded audio, Optimus and Megatron spend their photo op time posing for pictures and talking to the crowd. Obviously, Optimus goes for the inspirational route, which is fun to see, but Megatron goes back and forth between antagonizing the audience and coercing them to join the Decepticons. It’s quite fun to watch, even if it’s only for a few minutes.

If you’re a huge Shrek fan, then you’ll have loads of fun. Even if you aren’t, it’s a good time. However, the Shrek experience is one of the older rides, so the tech behind it is just not as impressive as experiences like the Transformers ride or Harry Potter’s Forbidden Journey. So unless Shrek means a lot to you, I’d put it a bit lower on your ride priority list.

Even if the lines are long, Universal makes waiting fun. 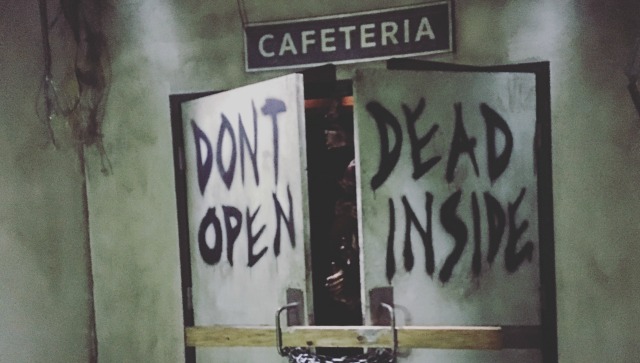 With the exception of just a couple attractions, Universal does a great job integrating the line into the actual attraction. So even though you’re waiting, you get to see awesome set pieces from the show or movie, and often times you get introduced to the story line behind your specific ride–it’s never as simple as something like “let’s pretend you’re in the first Transformers movie!” So be sure to look around and listen to any videos or recordings that they have playing while you wait. There’s lots to see and hear!

The TWD attraction is essentially a zombie-themed haunted house. So once I realized that, I applied haunted house rules to the attraction, and got a bit nervous (if you’ll recall, I am not a fan of haunted houses). So I reminded myself of things like, the actors can’t touch me, I’m allowed to run through the experience if I’m too scared, and realizing that the chicks directly in front of me would likely feel the brunt of the jump scares. However, once I got in, the whole attraction was so cool, and the walkers looked so true to The Walking Dead that I just became utterly delighted. So I started going through the experience with a stupid grin on my face. This clearly frustrated some of the walker-actors, and they started jumping back out to scare me a second time. So my advice to you is, even if your heart is filled with blissful, walker-loving glee when you go through the attraction, make sure your face conveys the appropriate amount of terror to keep those walkers in check.